Three simple ways to use power points in ELT 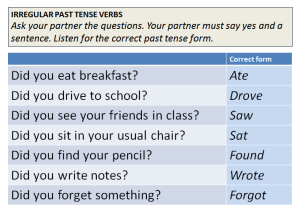 aching, but they lend themselves to lesson plans in myriad ways and are a great way to get one’s feet wet in the waters of technology  A very simple power point can be a reusable answer key, a worksheet, a game, or some other interactive practice.  We especially like the following three formats because they allow us to refresh and update traditional tried and true activities.

It is very easy to prepare simple slides with pictures that can be used to teach vocabulary and even grammar. Our colleague Erin Miller uses slides to elicit the passive voice from students. She shows a picture of a broken window then says. “Tell me about the window,” guiding the students to focus on the window as a subject and fishing for the sentence, The window is broken.   Once elicited, the target sentence can be written and analyzed for grammatical features, which are then applied to the next slide, a buried treasure and then a caged tiger.  The tiger was caught/captured.

The slides may then become the basis for stories in which the students try to explain how the window was broken, where the treasure came from or the tiger captured. This extension integrates the passive into a larger context in which learners have to make decisions about active/ passive forms.

Another popular ESOL application is to have pairs sit face to face, with partner A facing the screen and partner B facing the back wall. Partner A then uses the cues on the screen to do an activity, initiate a role play or play a game.

For example, we sometimes pla 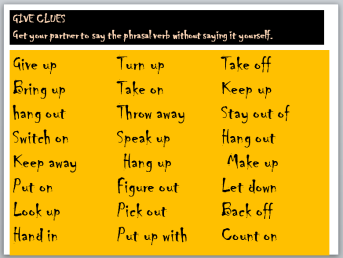 y taboo with phrasal verbs. Partner A can see the list of phrasal verbs, and he tries to get B to say the phrasal verb.  A uses context clues and verbal gap fills such as When you don’t want to try any more, you “….” To help partner B guess the phrase give up.

In the orange example here, which was used near Halloween, the choice of color and font actually support memorizing as well..

For irregular past tenses at lower levels you can make a slide to help pairs practice. Partner A looks at a slide with questions made with irregular verbs (as in the blue slide above). A then asks partner B. Partner B, who cannot see the screen, must then answer the question with a yes and a sentence containing the irregular verb form. (Note that the correct irregular form can be provided since B doesn’t see the screen.) The partners can then switch places and B takes a turn with a new screen, and a new set of irregular verbs.

Pronunciation is another area where a power point can support a drill. The example below shows how alternating colors can facilitate intonation practice. First the class repeats after the teacher to set the intonation pat 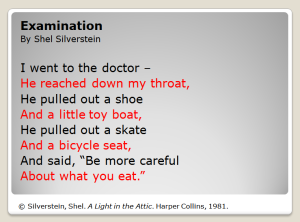 tern. Next the class can be divided in half so one half says the black line, and the other half says the red.  Then they can switch to practice the other line. Finally, pairs can practice alternating lines, listen to each other and give feedback, while the teacher circulates, listens and helps individuals.