Word forms are notoriously difficult for ESOL students to master.  This is especially true for those whose native languages are non-inflected, meaning adjectives, nouns, and adjectives share the same form, as in Vietnamese.  It is therefore not uncommon to see our Vietnamese students make errors such as these:

*She is very beautifully.
*Phuong prefers to work independent.
*I hope this project is going to be success. 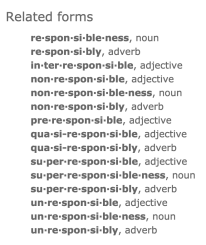 Typically, teachers often ask students to complete word form charts for the new vocabulary words they are learning.  Word form charts can serve as a useful reference.  Typical ones give students the noun, verb, adjective, or adverb form of a word and ask them to consult a dictionary for the other forms.   Unfortunately, however, this can often lead students to identify word forms that are antiquated, uncommon, and impractical.

For example, a quick search on dictionary.com for word forms can produce an enormous list, containing many forms our students would never need to use, and many native speakers never use (see Fig. 1).  By leaving things so open-ended, students can be at a disadvantage, for they are not equipped with the knowledge to determine which forms are common and which to ignore.

An easy answer for this is for teachers to give students a word form chart that is already complete, including only the most common and useful forms.  Students can then use this chart to complete activities that have them use the correct forms, such as a gapfill activity.  However, this common practice can often end being too big of a leap for students because they are unsure when they need to use an adjective or adverb, for example.

One way around this is to give students a chart that helps students identify the “frames” a word form can find itself in (see fig. 2).  This can work well for students with good analytical skills. For others, though, the jump is still too big, and they often just use the form they’re most familiar with.

The fact is that word forms only make sense when we look beyond the word. How do we know we need an adjective without the noun it precedes?   We can help scaffold such awareness by giving students phrases and lexical chunks with the target form to illustrate patterns before requiring them to use the forms independently.

This is the approach we took in Trio Writing 3.  Using a completed word form chart, students complete a gap fill activity that familiarizes them with word pairings (see Fig. 3).  Since the syntax is embedded in the phrase, students get a better feel for how the forms work with familiar partner words.  Unlike traditional gapfill activities, we are not yet requiring that students know how to use the forms by themselves.  That kind of production can come later.

Another way to expose students to correct word form usage is by giving them phrases with the forms and having them write sentences with them (see Fig. 4).  Seeing the forms in phrases can heighten their awareness of the “frames” that govern nouns, verbs, adjectives and adverbs.  Nation (2001) suggests that students need multiple exposures to a word before they acquire it as part of their active vocabulary.  It can be argued that the same is true for word forms.  With frequent exposure of correct forms in set phrases, we can increase the likelihood that students will begin to understand how they work and when to use them.  When this is put in place before we ask students to use the forms independently, we can set them up for better success.